Foods to Try While Traveling in Iran

Iran has a wide variety of foods that some of them have many fans both in Iran and other parts of the world. One of the most memorable memories of foreign tourists who have traveled to Iran is trying its delicious foods. A large number of tourists from different countries of the world have acknowledged on various websites and books that they have been fuddled by Iranian foods during their visit of Iran and they are willing to come to the country again merely to repeat the pleasure of eating. Different kinds of stew, pilafs, potage and soups, seafood and desserts can be eaten in Iran. Here are the eight most popular Iranian foods.

Kebab is one of the most famous and popular dishes in the Middle East, especially in Iran and Caucasus. Cut out red meat or ground lamb, mutton, beef and veal are used to make most of Kebabs. Onion and spices are also widely used in their preparation. There are many types of kebabs in Iran such as Barg, Chenjeh, Shashlik, Sour Kebab, Chicken Kebab and so on but Kūbide with cooked rice is one of the most popular ones. This type of kebab which is made of ground beef or mutton is considered as a popular dish at wedding ceremonies and parties in Iran. In order to make this popular kebab, the skewers are placed in a row on a brazier or fire and rotated so that both sides are well cooked. 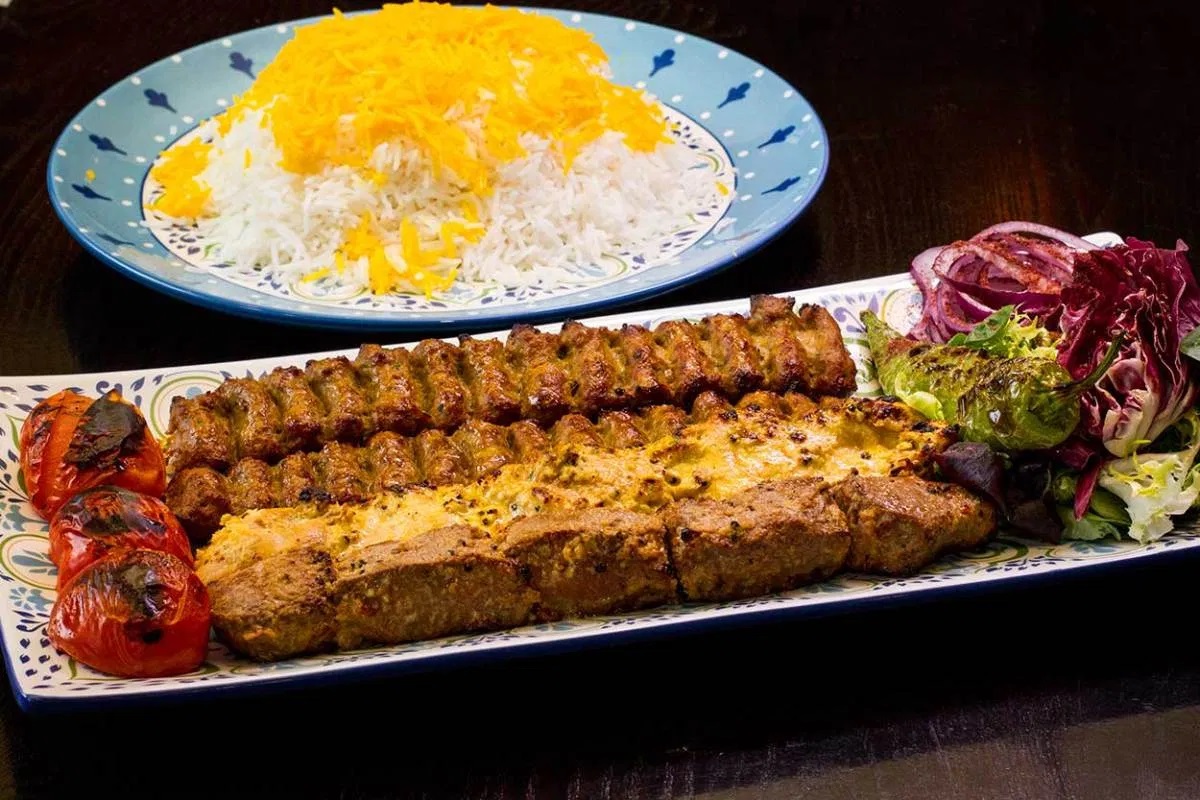 If you ask any Iranian what to eat in Iran, Ghormeh Sabzi would probably be at the top of their recommended list. It is a genuine Iranian stew which is cooked with plants such as chives, parsley, fenugreek, coriander, spinach or beetroot leaf, beans including kidney beans, pinto beans or black-eyed peas, red onions and red meat. The stew should taste slightly sour, so a little dried lime or fresh lemon juice is added. The biggest secret to cook a delicious Ghormeh Sabzi is its boiling time. The lower the temperature used over a longer period of time, the tastier it becomes. Ghormeh Sabzi is served with white or saffron rice and its eating experience would definitely be interesting and stunning for foreigners as well. 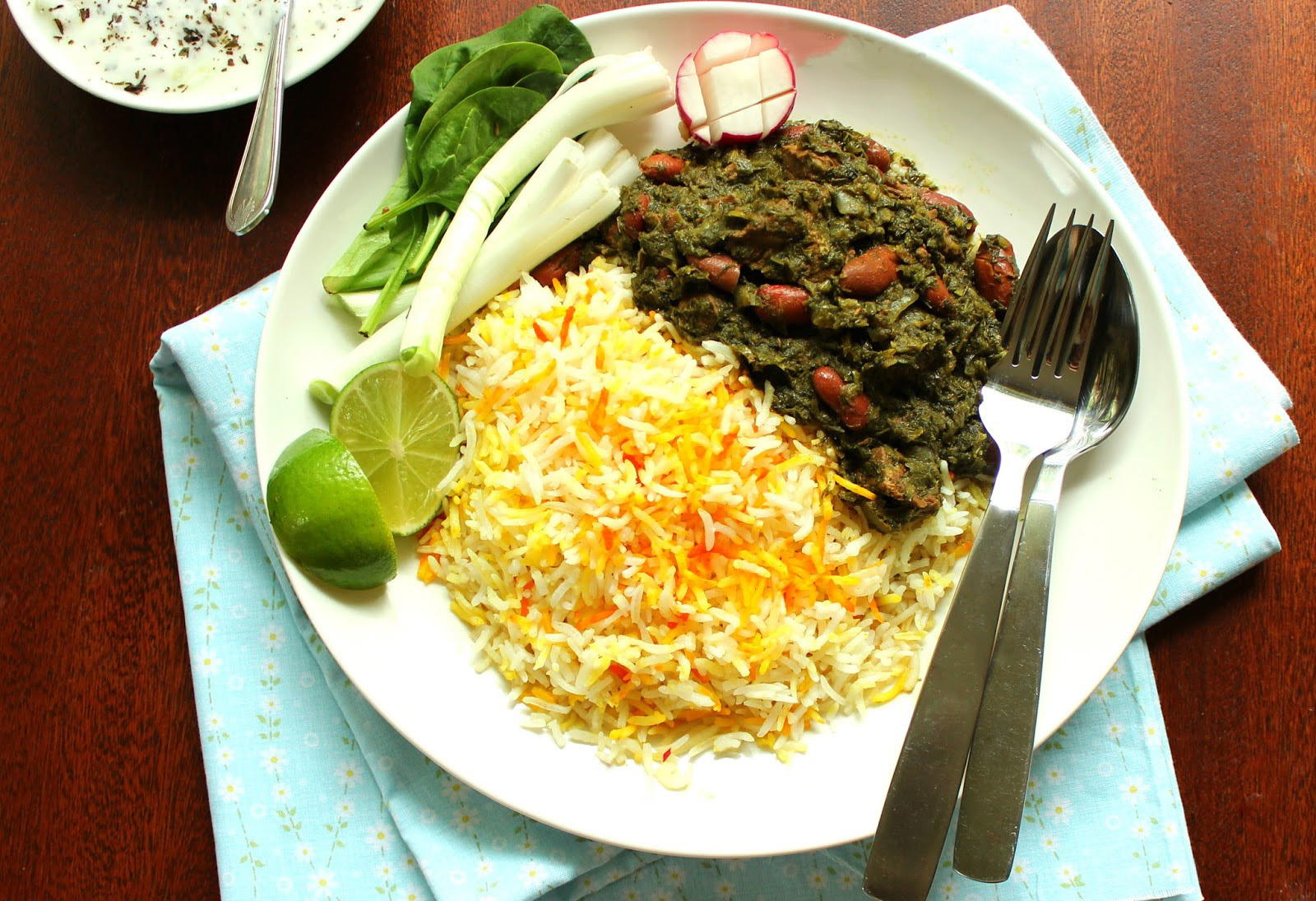 A luxurious and delicious stew that has won everyone’s heart and adorns serious gatherings and parties. It is made with ground walnuts, pomegranate molasses and chicken or meatballs. Like Ghormeh Sabzi, Fesenjān stew should be cooked on low heat for hours to be thickened. It is cooked in different ways in different parts of Iran so that it tastes sour in some regions, sweet and sour in some others and sometimes a little sugar is also added to make it completely sweet. 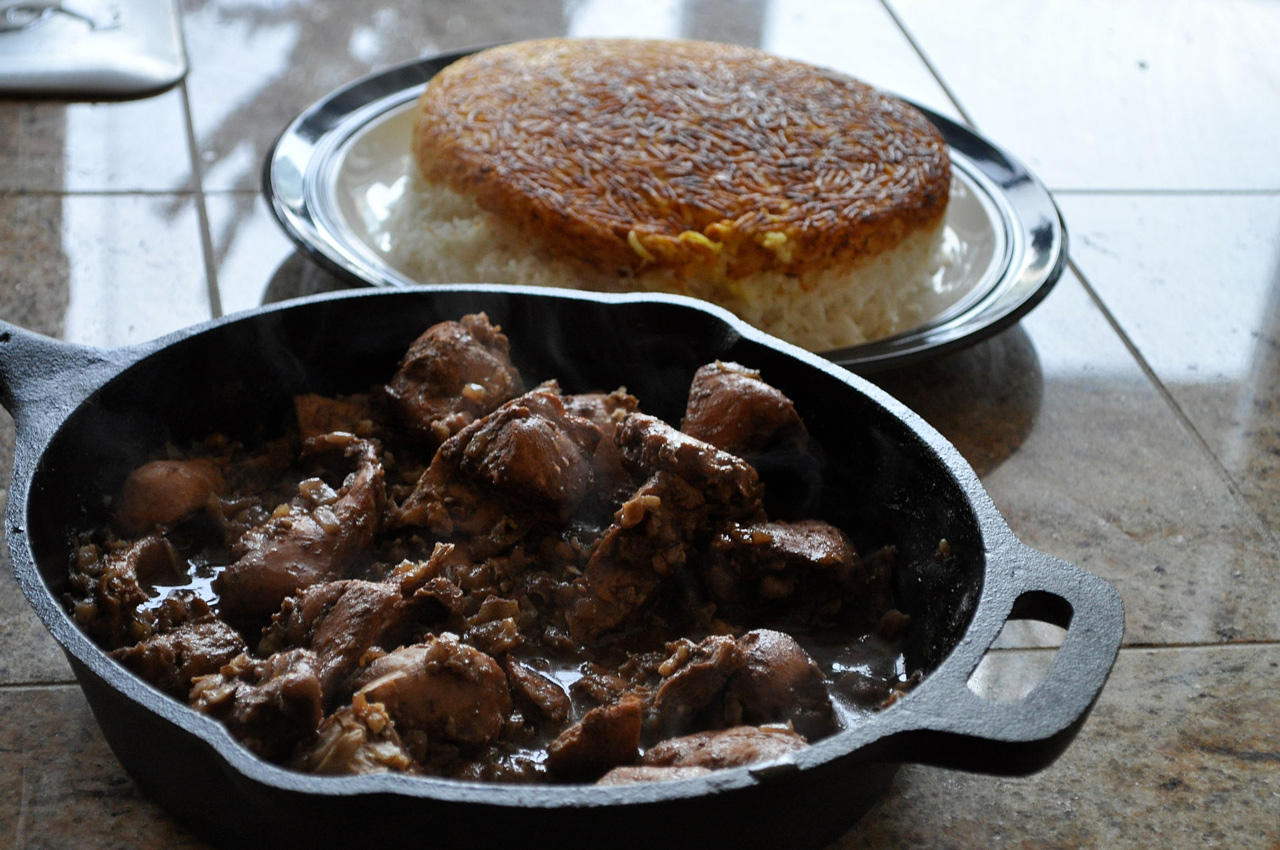 It is one of the traditional foods of Iran which is also called Abgoosht. The main ingredients are mutton, tail fat, tomatoes (or tomato paste) and peas. The dish which is made by cooking meat, onions, potatoes and peas is eaten in two stages. First, its water is mixed with bread crumbs and then eaten (Tilit). The rest of the ingredients can be mashed with a meat tenderizer (Goosht Koobideh) and served with bread, onions, pickles and herbs.

In case Baghali Polo is cooked with lamb shank, it is considered as one of the most luxurious and dainty dishes of Iran. White rice is mixed with broad beans and saffron and then the lamb shank or chicken is placed next to the plate and served. 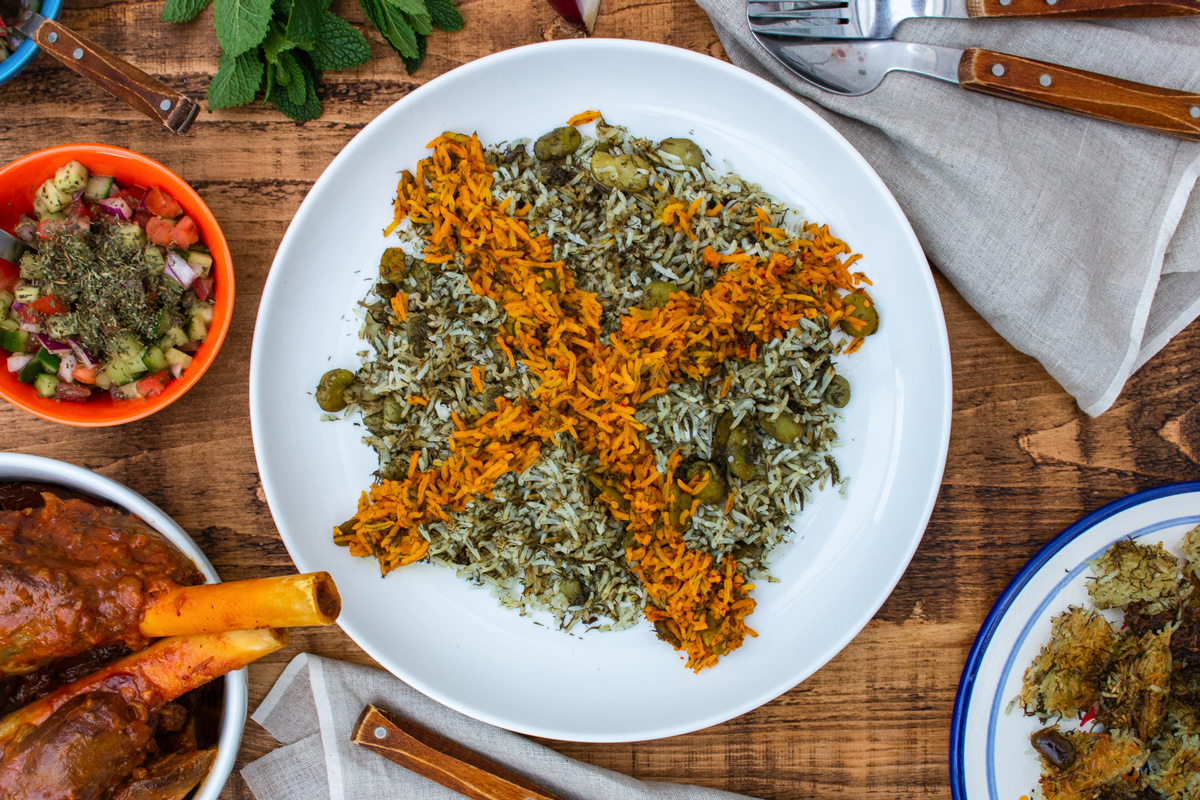 As the name suggests, it originally belongs to Tabriz. However, it is cooked throughout all Iran. Among the various types of Kufteh made in Iran, Tabrizi is the most well-known and delicious one. It consists of a mixture of meat, split peas and herbs; and inside is also filled with boiled eggs, prunes, walnuts, fried onions and barberries. 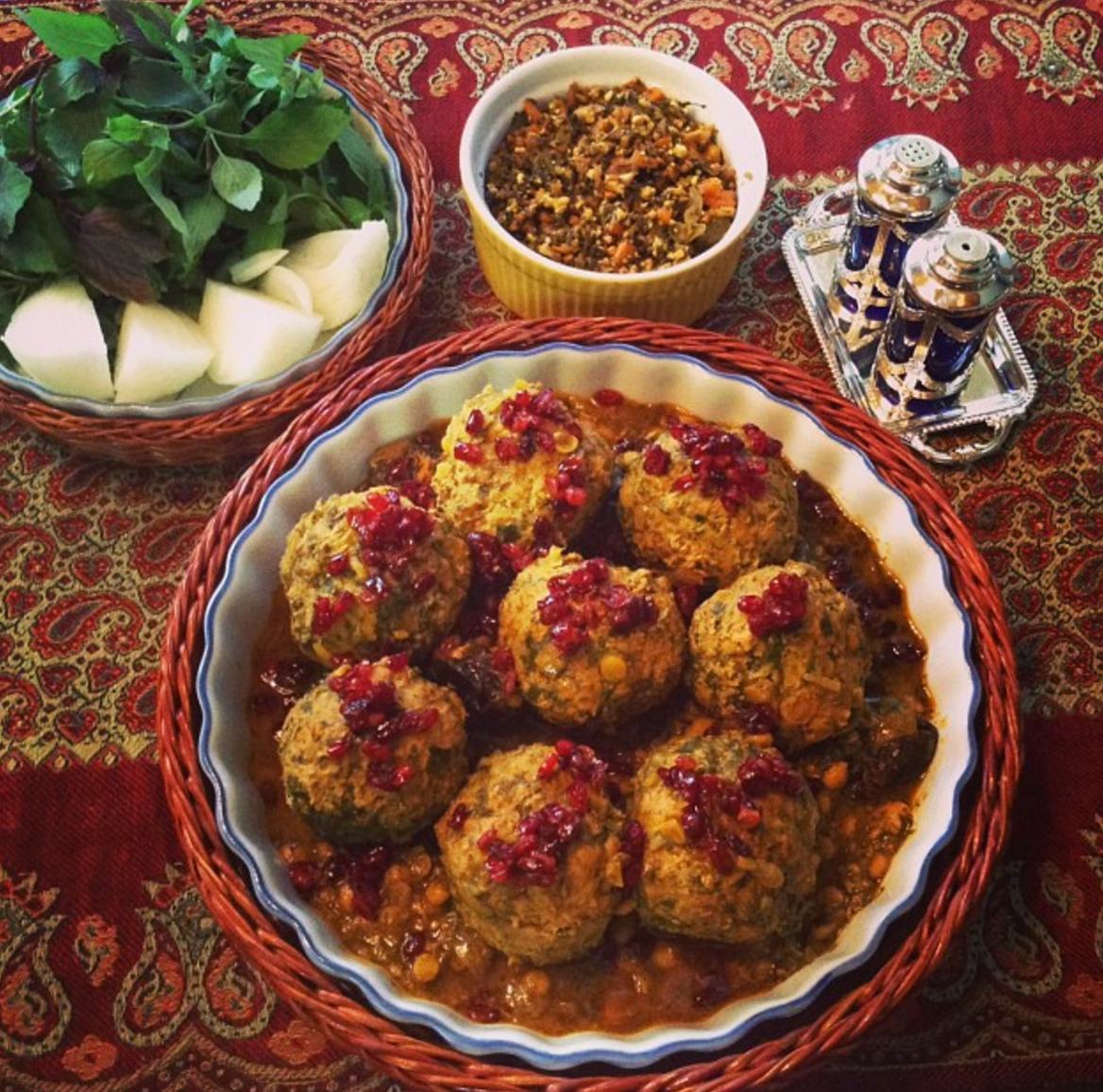 A kind of stew which is often made with French fries and sometimes eggplants; the former is called Gheymeh Sib Zamini (which is called potato in English) and the latter is called Gheymeh Eggplant. To make the stew, the mutton is cooked with onions, split peas and tomato paste, dried lime and water until it is thickened perfectly. Finally, the French fries or fried eggplants are added to the stew and it is served with white or saffron rice.

Plenty of potages can be eaten in Iran and each region has its own specific one. Aush Reshteh is the most popular one and foreign tourists are more familiar with it. To make the Aush, various grains are cooked with particular herbs and then thin noodles and curd are added. The Aush topping is highly important among the Iranians. Fried onions, fried garlic, fried mint and curd are among the main Aush decorations. 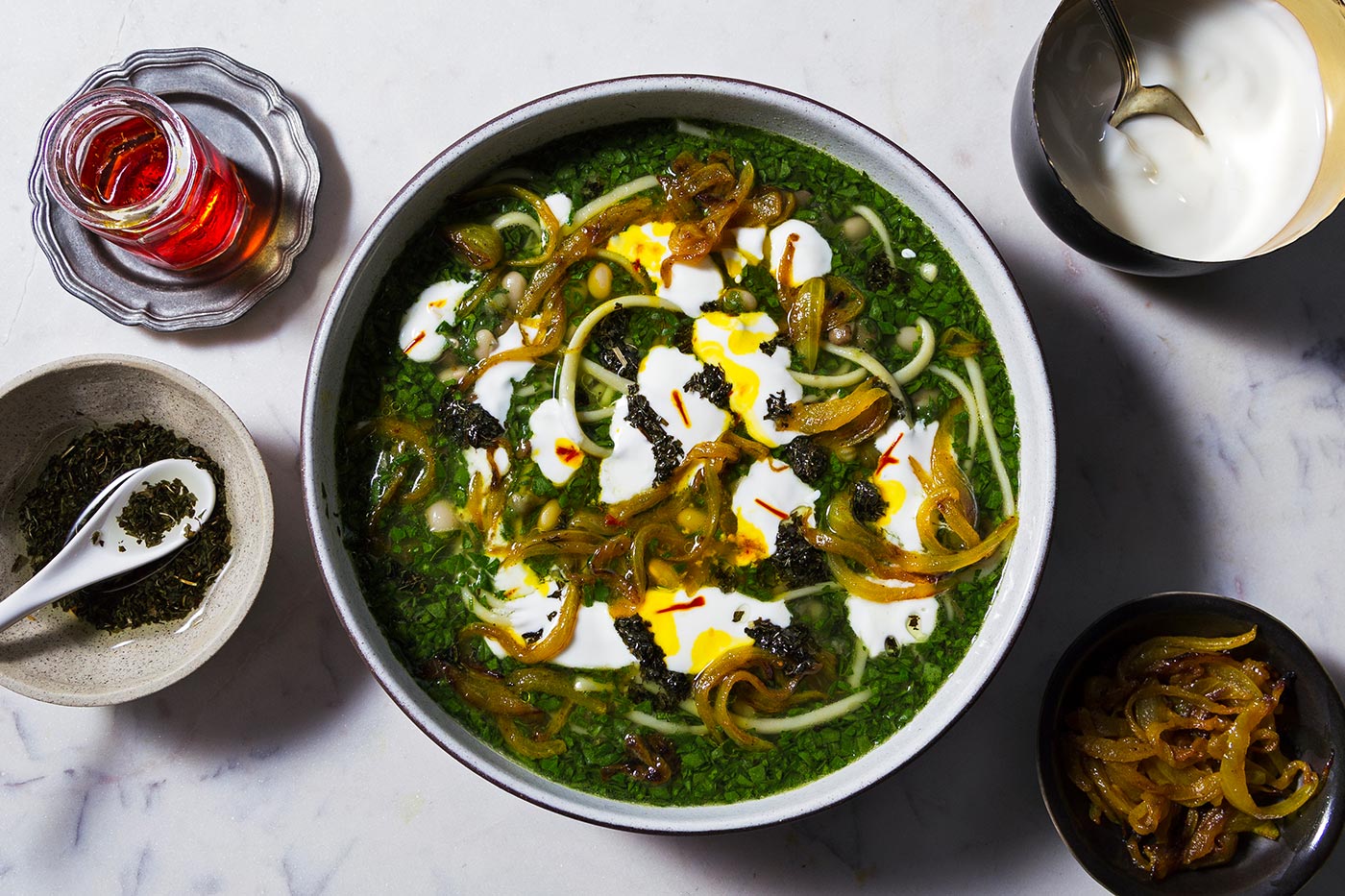