Qazvin is one of the historical and developed cities of Iran.The roots of Qazvin belong to the Sassanid era which flourished on the orders of Shapur. Archeological findings in the Qazvin plain reveal the existence of urban agricultural settlements as far back as 7000 BC. Qazvin was the capital city of the Safavid Dynasty for 57 years and after the Safavid era came to an end, the city remained an important hub for trade and culture in Iran, therefore it has many historical sites and museums. In Qazvin there are various old and ancient artifacts including Qajar bath, Sardar water storage, Chehelston palace and Sepah Street which is Iran’s first street and Saad al-Saltanah caravanserai. 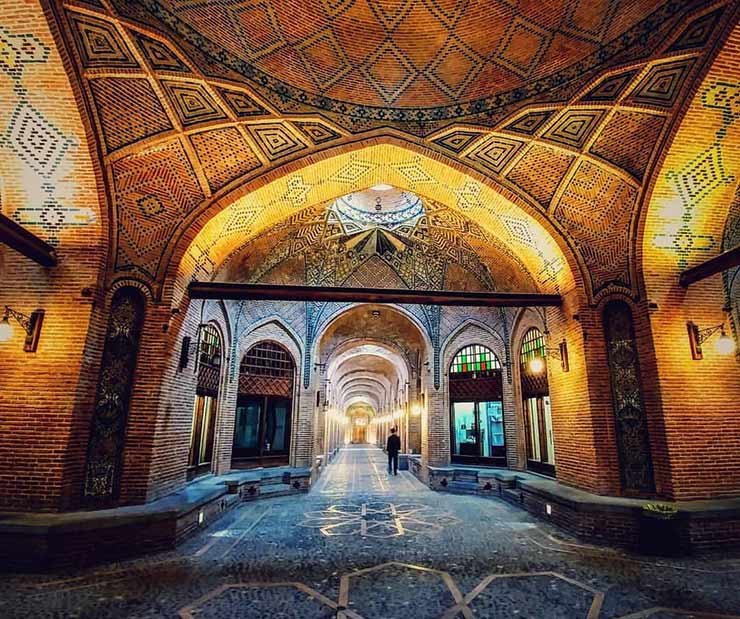 In the past, due to the distance between cities, it was necessary to build rest places for the passengers and their cattle, and this led to the construction of places called caravanserais or inns everywhere in Iran along the communication roads or within the cities. One of the most beautiful and famous of these buildings is Sa’ad al-Saltaneh caravanserai, which dates back to the time of Nasser al-Din Shah (who ruled from 1848 to 1896) during the Qajar era. The caravanserai of Sa’d al-Saltaneh is considered a main commercial center and reminiscent of Iranian private sector commercial development that featured trade with Europe and Russia during the Qajar era.
Mohammad Bagher Khan Saad al-Saltanah Isfahani, the ruler of Qazvin in the late Nasser al-Din Shah Qajar’s reign (1892), ordered to build a caravanserai, due to Iran’s extensive economic relations with Russia and Turkey, in a land of about 2.7 hectares with 400 chambers in the city of Qazvin and put his name on it. The construction took long two years and was finished by cooperation of two Isfahani and two Qazwini architects, in the year 1894. Until the First World War, the caravanserai was the center of commerce and business activity of the city but after the Russian government’s political changes, it lost its brisk market and businessmen gradually abandoned their stores. The historical structure lost its status as a trade bridge between Europe and Asia and its economic life continued semi-actively. 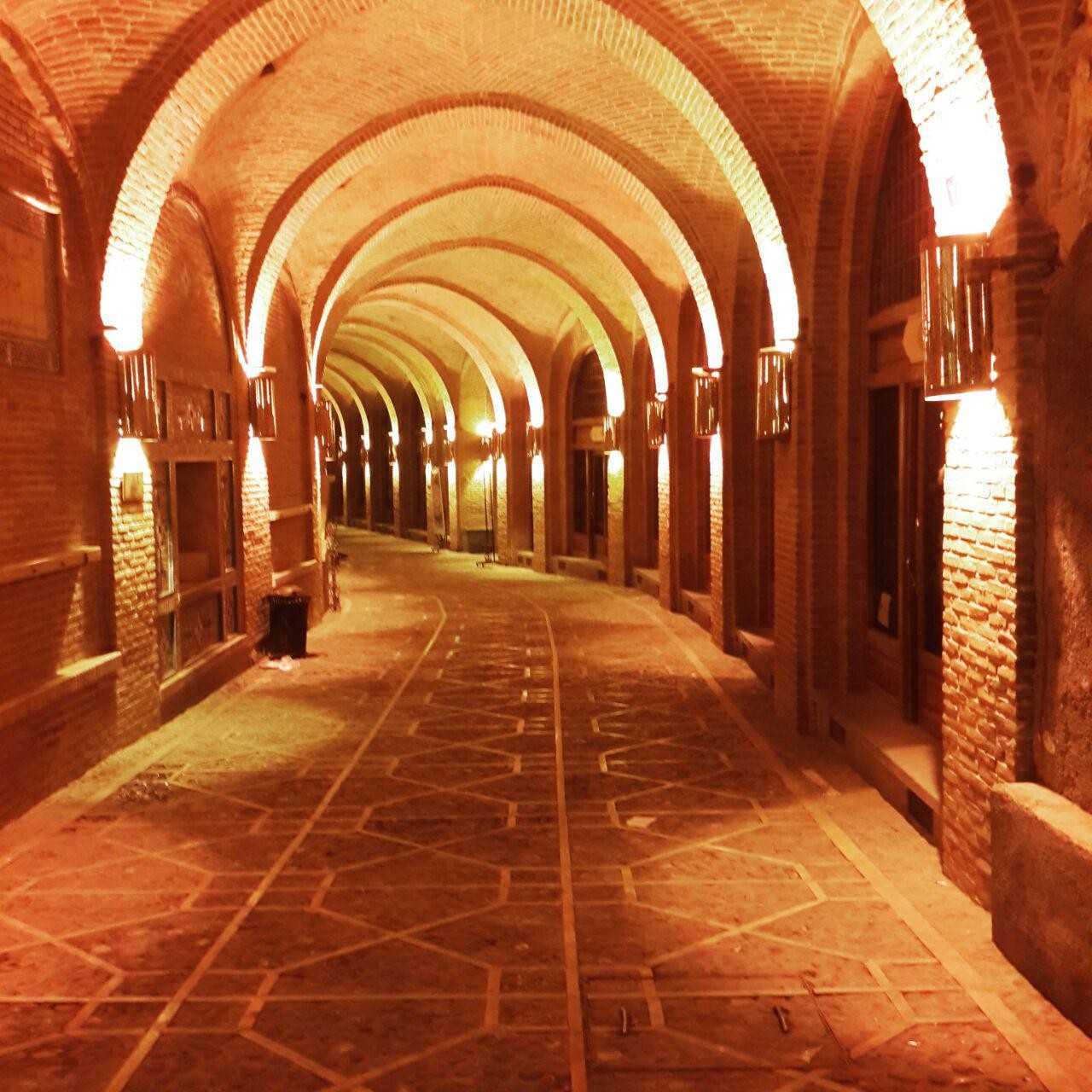 The Saad al-Saltaneh Historical Complex is one of the most valuable works of the Qajar era and one of the 38 selected monuments of Iran’s cultural heritage. The caravanserai is located in Qazvin downtown in Imam Khomeini St. near the old bazaar of Qazvin and the Chehelston palace. The moment you step into Caravanserai entrance, a journey down the history lane begins. Saad al-Saltaneh is the largest inner city caravanserai in the world and the largest inner city commercial caravanserai in Iran. It is one of the few caravansaries in Iran that has several baths, inn, arcades, series of shops, Chahar Sough (four pillars), mosque, tea house and etc. The building has several entrances, several large courtyards, numerous chambers, magnificent vestibule, long corridors, and brickwork decorations.

The caravanserai’s main entrance opens to the Imam Street, which has four arches on its sides with a roof -with no window- made in the form of skull-cap. A vestibule connects the entrance to courtyard that is surrounded with chambers decorated with little verandas. Aisles carpeted with stones and booths decorated with hundreds of years old brikes lead you to several lively courtyards.Behind the eastern chambers, there lies the large warehouse as well as the Sadieh Bathhouse. Moreover, some hujrehs or the residing rooms for the travelers are situated one meter above the courtyard ground level.Perhaps the most important part of the caravanserai is the Chahar Sough (four pillars) on top of which is a large tiled dome. The ceil of this dome has no window, and its four sides are covered by four lighted half-domes, making the space appear larger than it is. 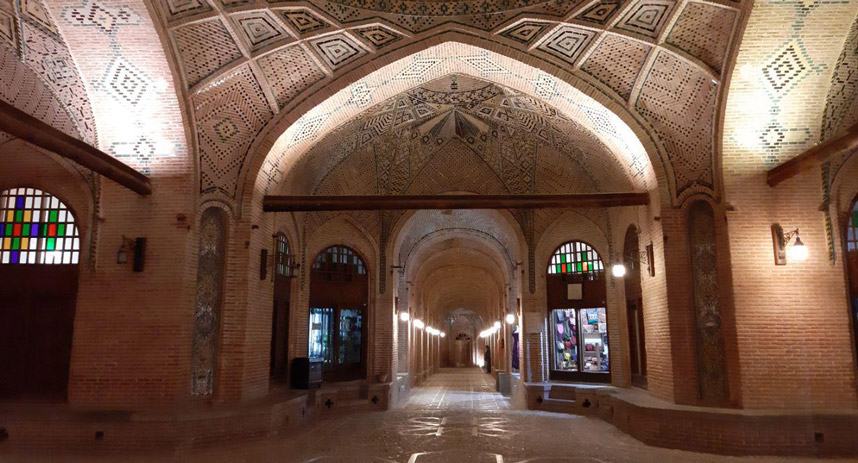 Saad al-Saltaneh Caravanserai has been brought to more attention worldwide as it was purchased by the Cultural Heritage Organization in 1999 and recently being renovated by the municipality of Qazvin and as a result, some parts of the caravanserai give off a rather modern feeling. Currently in the context of the caravanserai, some of the chambers have been transformed into cozy places that you can enjoy cafes and restaurants in a relaxing atmosphere, beside visiting jewelry, handicrafts, carpets, paintings, and ceramics shops to buy the best souvenirs.