Hormuz Island is one of the most beautiful and special islands which is surrounded by waters of the Persian Gulf and it is located in southern parts of Iran. Hormuz Island has an area of 42 km and it is located at a distance of 8 km from Bandar Abbas. The island has an oval-shaped structure and it is considered as one of the salt domes of the Persian Gulf. It is called the key to the Persian Gulf because of its proximity to the Strait of Hormuz. That’s why it is of great importance in terms of its geographical and commercial location. Some spectacular attractions of Hormuz Island are colorful mountains, cliffs formed by the soil erosion over millions of years, magnificent rock salt and red soil which is the most beautiful one. Due to its beautiful minerals and rocks, the island is called the geologists’ paradise. Tranquility and silence surround the shore. In this area, summer is so horrible that the residents prefer not to stay there. Weather is sultry in spring and autumn. But winter is the perfect time to travel to Hormuz Island because the pleasant weather, bird and turtle migration will bring an unbelievable pleasure to you. If you intend to travel to Hormuz Island and you want to become familiar with its attractions, read below. 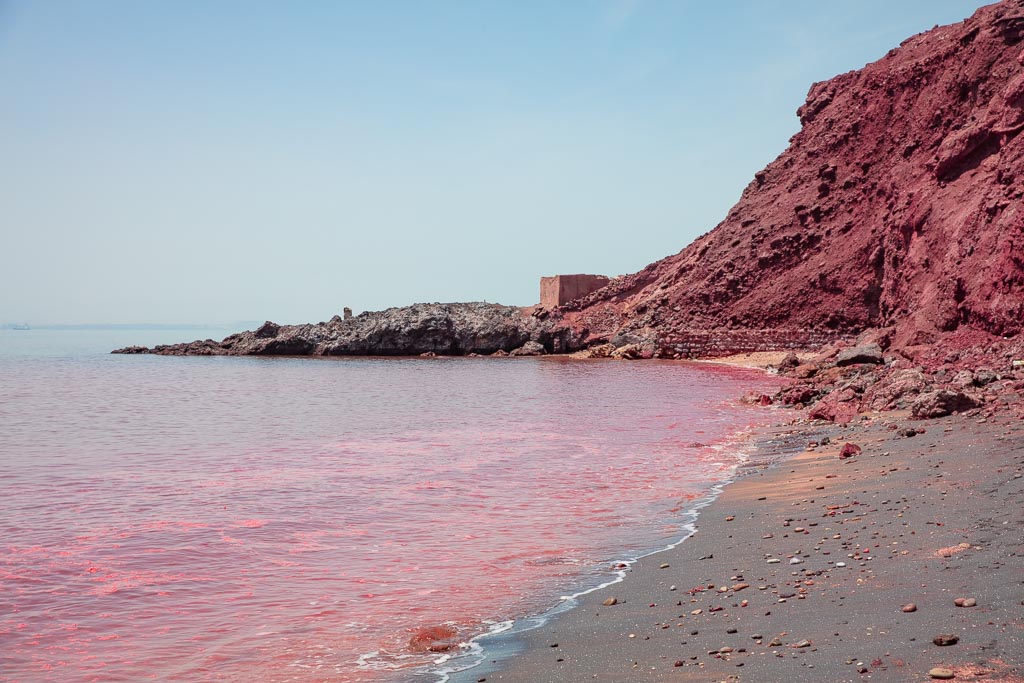 The presence of particular minerals in the island soil has made it red. In terms of the mineral, Hormuz red soil mine has the highest purity in the world preceded by Spain. The most important colorful soils of Hormuz Island are composed of iron oxides and white, blue, pink, green and gray color spectra which are volcanic compounds. The soil is used in paint, cosmetic, tile, ceramics, mosaic and pottery industries, etc. The only edible mountain in the world is located in the rainbow island of Hormuz from which a kind of edible soil is extracted and used as a spice. 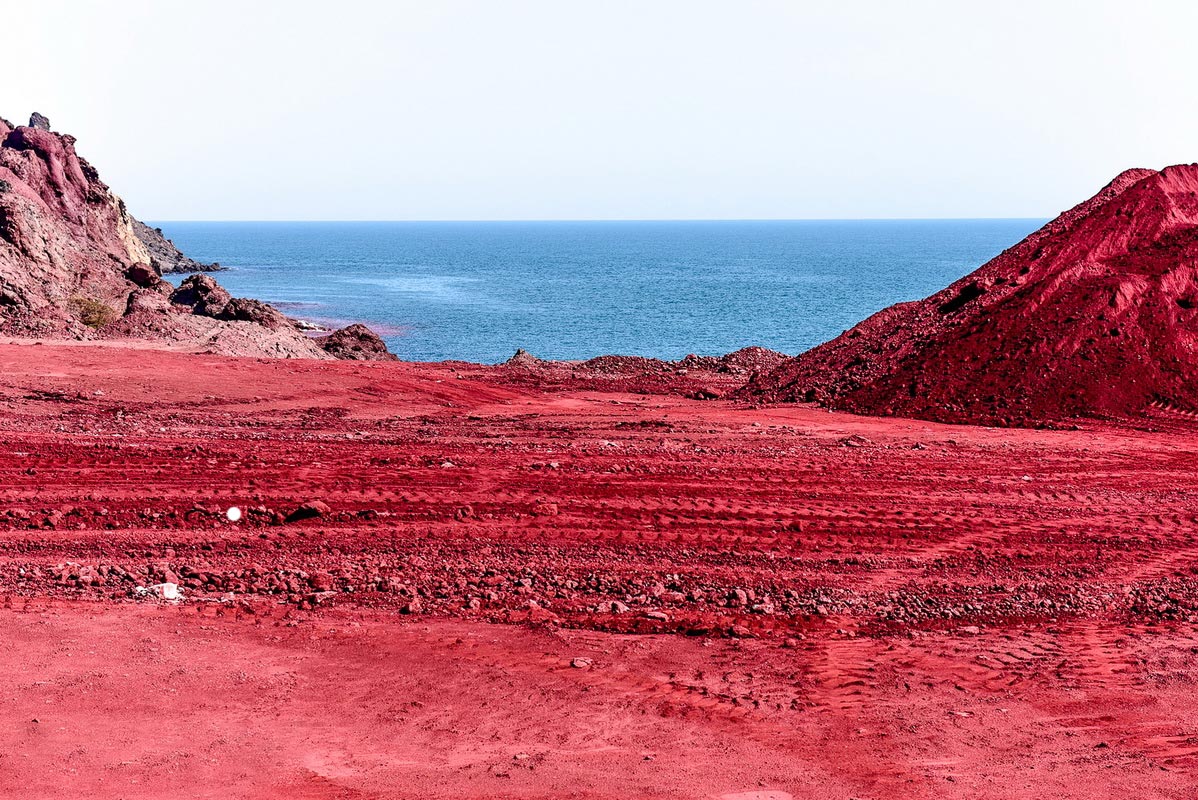 Mangrove forest is located in the northeast of the island. Mangrove species are the trees between 3 to 6 meters in height with lime-green foliage that live in the brackish water. Mangrove is a plant from the Verbenaceae family whose seed grows on the mother tree and produces seedlings and afterward it separates from the tree and falls into the swamp. Mangrove forest is located on the sea and salt water and its compatibility with the salt water and unfavorable conditions has made it an exceptional plant. The tree that sinks in water at high tide absorbs the fresh water and repels its salt with purifying feature of its bark. The mangrove is in fact a natural and God-given desalination plant. Mangrove forest is a safe habitat for a variety of aquatic animal species, birds and amphibians. 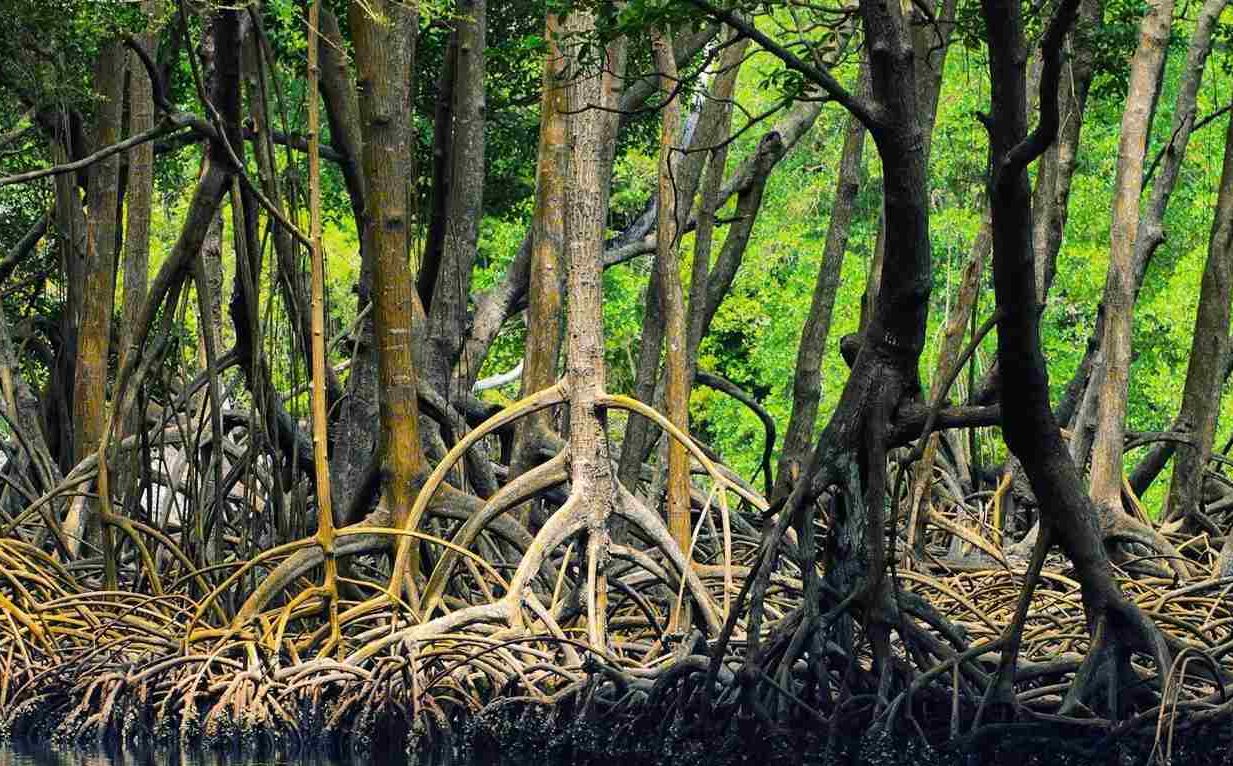 Valley of the Statues

In some part of the mountainous region of Hormuz Island, there are strange rocks and cliffs each in its own special shape. Depending on the visitors’ imagination, these amazing rocks resemble different types of animals. For instance, one looks like a sheep’s head, another looks like a chicken and rooster’s head. The rocks on the left side look like simurghs and dragons. At the end of the Valley, you arrive at a precipice where you may enjoy one of the most beautiful views of the Persian Gulf. The entire route leading to the Valley is full of crystal sand. There are no signposts and it is very difficult to arrive at the Valley, without a guide. 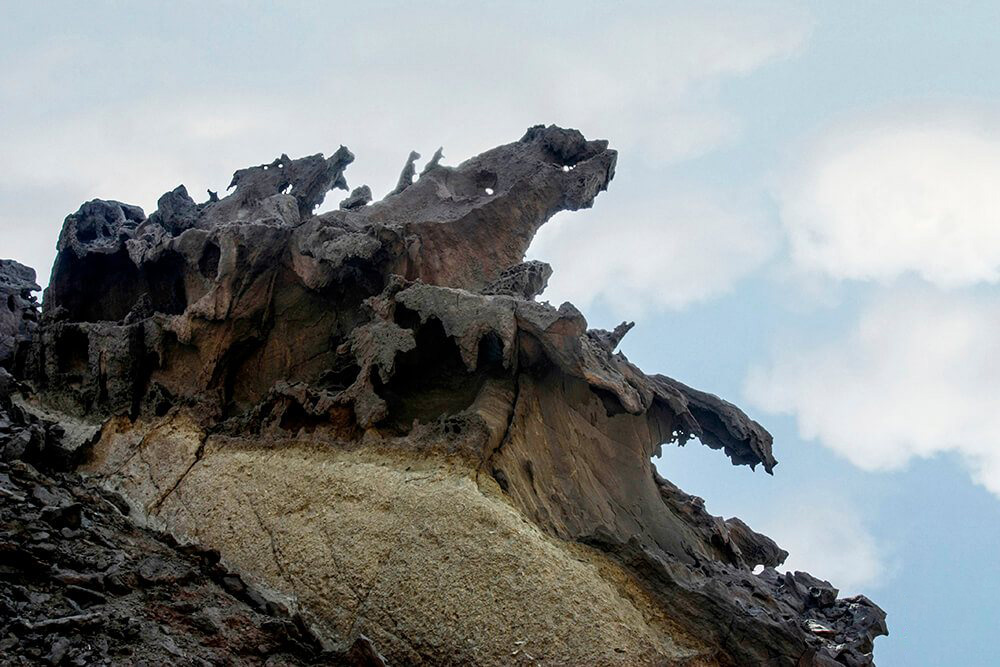 It is one of the most interesting attractions of Hormuz Island. Different mineral deposits existing in the region have created a variety of different colors. Yellow, red, silver and black spectra are primarily composed of clay minerals and iron oxide. They are the most common colors which are seen in the Rainbow Valley soil. White, blue, and pink soils that create a beautiful landscape are due to the volcanic compounds. Like a natural carpet, the colors spread on the floor and catch your eyes. 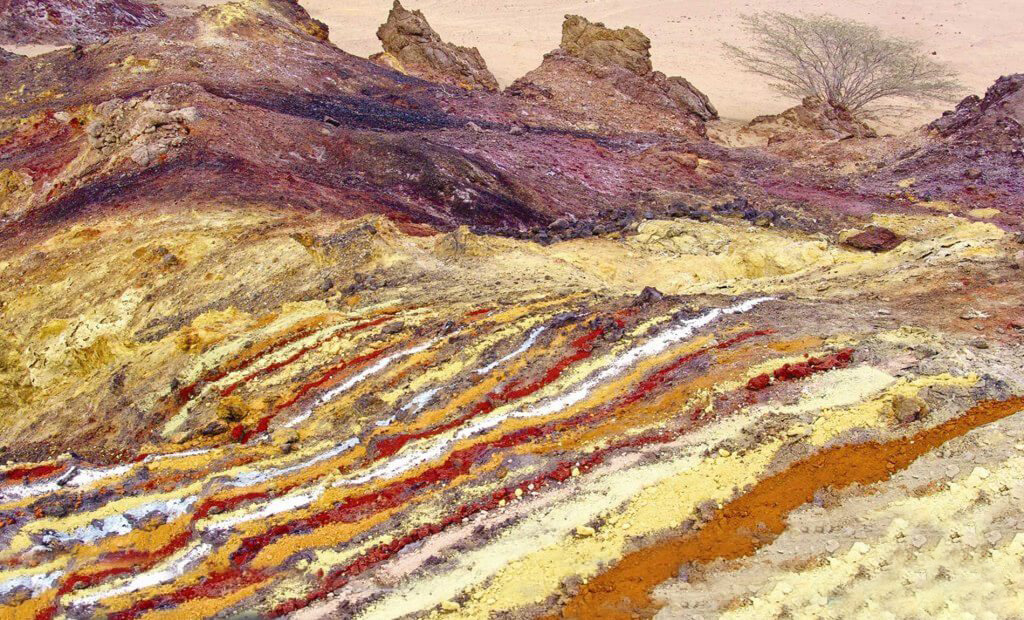 Between Rainbow Valley and Valley of the Statues, you will see a different mountain. Other mountains of the island are formed of the colorful soils, but this beautiful mountain is entirely composed of salt. Due to the structure of crystals and rock salt, it seems that the whole mountain is covered with snow; That’s why it is called “Snowy Mountain”. 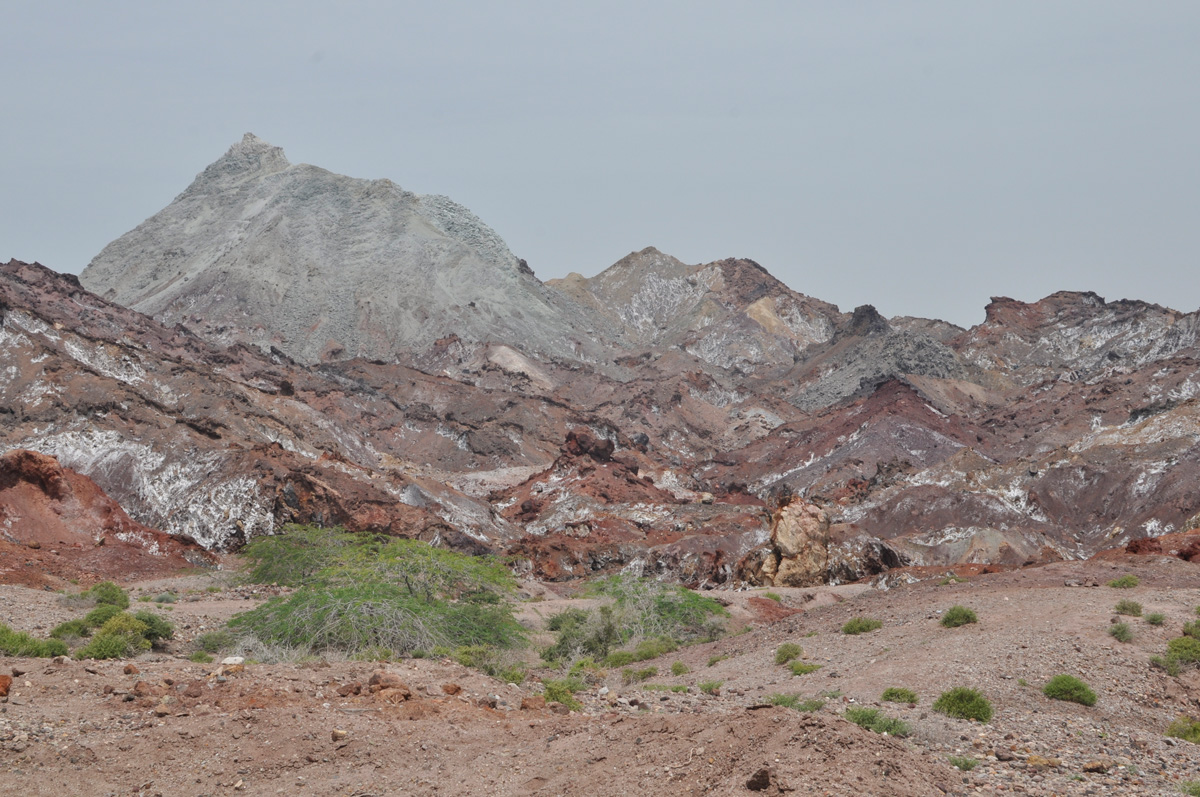 Hormuz Island hosts the presentation of the Soil Carpet every year. The carpet is designed and made in the capable hands of the island’s artists. The Hormuz Soil Carpet is manufactured by the painters on the edge of the Persian Gulf, on the beach sand using the colorful soils of the island. Due to the iron oxide compounds and various oxidations, the soil of Hormuz Island can be found in yellow, white, red and brown by which various carpet patterns are designed. 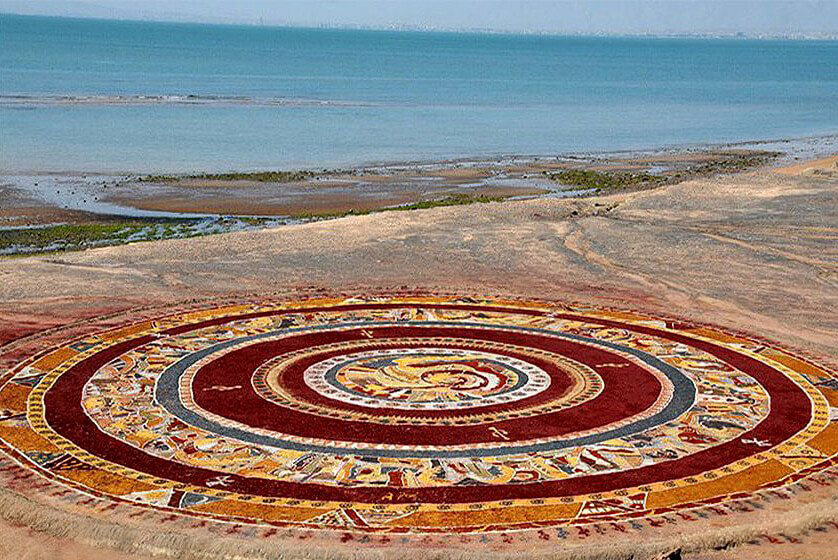